** If your clients' mortgage approval is before February 15, 2016, they will be allowed to purchase with 5% down up to $1M; This is if the purchase date is after February 15, 2016. This also works for long-term rate holds for builder/developer files.

Please don't hesitate to contact me if you have any questions and I can refer you to a great mortgage specialist to answer other questions you may have. 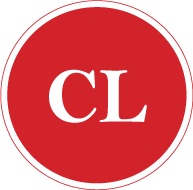 Posted by Vancouver Realtor at 11:47 No comments: 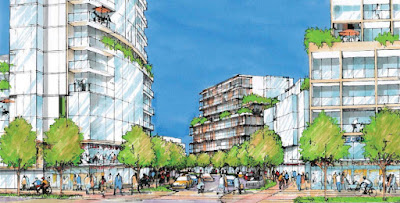 An unused TransLink bus depot at the intersection of West 41st Avenue and Oak Street in Vancouver is being primed for a major residential development project.
The site is framed by West 41st Avenue to the south, the lane behind Oak Street to the west, West 38th Avenue to the north, and the lane behind Willow Street to the east. It was the city’s main bus depot until 2006 when TransLink relocated its maintenance facilities, 1,200 staff, and hundreds of electric trolleys and diesel buses to a new depot located just west of the Arthur Liang Bridge on the north shore of the Fraser River.
The site is still used by TransLink, but in a limited capacity for vehicle commissioning and decommissioning, maintenance, and storage for retired buses.
Under the policy statement, between 1,000 to 1,200 residential units will be built on the property, and there is a requirement that 20 per cent of the units be allocated for affordable housing. At least 35 per cent of the total number of market residential units must have two or three bedrooms while a higher standard of 50 per cent is required for the affordable units
Building heights will range between three to 15 storeys, with the tallest buildings located within the centre of the site and along West 41st Avenue. Shorter buildings will be located along the north and east perimeters to provide a transition to the existing low-density neighbourhoods.
Local retail and services, such as a small grocery store, cafe, and medical offices, will line the new development’s street front. There will also be a 2.3-acre park in the middle of the site as well as a childcare facility.
Approximately 0.75 kilometres of streets and lanes will be built, and pedestrians and bicycle facilities will be a major focus; A network of streets, mews, pathways, open and public spaces will be created within the site.
Excluding the park space, the development will have a floor square ratio density of 2.5 FSR by the time it is fully complete.
Proposed layout of the Oakridge Transit Centre 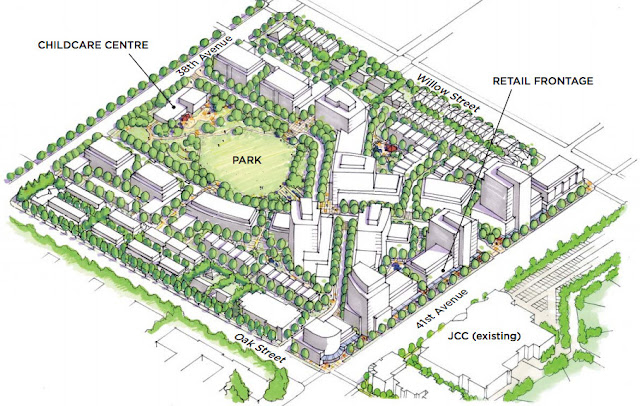 Three adjacent sites were also considered in the policy statement: a six-storey building is slated for the Oakmont Medical Centre property; an eight-storey building at the Petro-Canada gas station at the northeast corner of the intersection of Oak Street and West 41st Avenue; and usage and density rezoning considerations for the 3.3-acre Jewish Community Centre across the street.
Spurred by the construction and success of the SkyTrain Canada Line, this will be the Cambie Corridor’s third neighbourhood-sized redevelopment project.
Over the next eight years, the 28-acre Oakridge Centre site will be redeveloped into an expanded indoor and outdoor shopping centre with 14 towers ranging between nine to 44 storeys. Over 3,000 units of housing will be built, along with office space and a large nine-acre public park on the mall’s existing rooftop.
And at Vancouver Coastal Health’s 25.4-acre Pearson Dogwood Site at 57th Avenue and Cambie Street, another 3,000 units of housing could be built including 623 units for long-term care, supportive housing, non-market housing, seniors non-market housing, and market rental housing. The development will take the form of buildings between three to 28 storeys tall. The health agency has also committed to help fund the construction of an additional Canada Line station at 57th Avenue to serve the transportation needs of the new development’s residents.
A fourth major development site along the Cambie Corridor is likely to be considered in the near future. Last year, Canada Lands Company and First Nations groups purchased the B.C. RCMP’s former 21-acre headquarter near Cambie Street and West 33rd Avenue. The redevelopment of the property into another dense residential neighbourhood is likely.

Thank you for a wonderful testimonial :)

“We are grateful to have met Carmen and there was a comfort zone to her personality, and how she presented herself in a professional manner. Having engaged her as our agent there was no regrets. We are pleased with the time that my wife and I spent with Carmen on searching for a new home, without her this wouldn’t have been possible. I would highly recommend her. Thank you again, Carmen, and if there is any need in the future, we will be calling on you.”

Posted by Vancouver Realtor at 01:37 No comments: